Letters from my Daddy 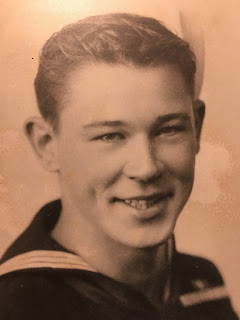 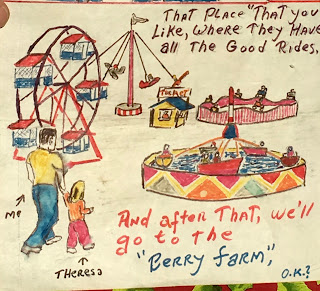 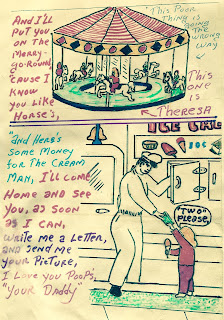 Letters from my Daddy are now some of the very few material items I have from him, but they hold a very special place in my heart.  They represent for me my father's awareness, compassion, joy and art.  He tells me, "When I come home, you and me are going up to that place you like, where they have all the good rides. And after that, we'll go to the "Berry Farm" o.k? And I'll put you on the Merry-Go-Round cause I know you like the horses. I'll come home and see you, as soon as I can."

It must have been difficult to explain to me that he was going to be gone for the next three months, come home for two months and return to the sea again.  Now as a parent myself, I can imagine this was difficult.

I am sure back then, it kept me thinking about the day, with the horses I liked and the Merry Go Round and the ice cream man.  But, now I think about those days and I can hear him telling me about how when he was little, him and his brother Buddy used to be taken by their parents to Coney Island. How they had the best hotdogs and their family was happy before his Dad died when he was twelve.

My Daddy had a very acute sense of what it meant for your Dad not to be present.  Back then, when he wrote me these letters in 1972, it was the Indian Ocean that kept him from me, now it is the ocean of time and space.  This blog is a letter to him.  A memory captured in a cloud.  As the paper yellows on those letters, my own children grown into adults, I remember the California sun, the Berry Farm, and that I had a father who loved me, who had endured many hardships in his life, but never stopped looking for the joy in the world.  I remember him telling me stories and jokes that he would laugh at himself just think about it before he could tell it. And when he did, the dimple in his cheek would get deep and his eyes would twinkle.  I remember him teaching me about all of the stars and the constellations. I remember a story he told me about how he built a wooden wagon to look like a car complete with a steering wheel during the depression in New Jersey. His brother Buddy "found" the wheels that looked suspiciously like those of the neighborhood ladies baby carriages. Buddy, Daddy and their crew of Bayonne boys decided that to celebrate they would take their new wheels to the movie theater on Sunday for the double show.  The theater was at the bottom of the hill, and away they went!  It was a resounding success until the end of the show when it was time to push the car back up the hill.  Everyone except Buddy decided they needed to go home sans the car.  The moral of this story my father said was to be sure your friends are the push you back up the hill kind a folks.
I remember my father every time  I walk down the halls of my house where these letters hang in frames, I touch the words, the representations of me and him, and I remember that in the ocean of time, he is never farther away from me than the beat of my own heart.

He ends his letter by asking me to write him a letter and send him my picture.  I am sending this letter across the rainbow bridge to Daddy, I hope it finds it's way from Cassiopeia to the Big Dipper and beyond. 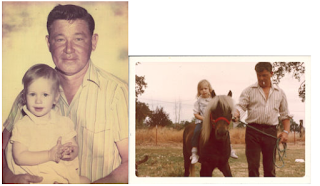 Posted by The Salty Sea Siren at 4:42 PM