See You Next Trip 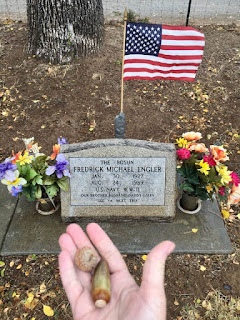 “See you next trip” were the words I heard from my father’s lips every time he left for sea.


This refrain was not accepted by me.  He told me that goodbye was for when you left this life, a sort of superstition he had.  If I pressed him to say goodbye to me, he would say “no”. He would always lower himself to eye level when explaining something to me.  Many of the loving things my father did where non-verbal, but in this case he wanted to be clear about why and how he used language.


I was just five, an October baby, I was already in kindergarten early and seriously suspicious of formal education given my two month experience with it.  On top of all this, it was time for Daddy to return to the sea.  My little nervous system was on overload. He captured my gaze with his cerulean blues and waited until my attention settled on them. “I will never say goodbye to you until it is time for me to leave the earth.”  He let me take that in.  Then he said, “If you don’t like see you next trip, we can always say, so long, another words, it will only be so long until I see you again.”  I decided “See you next trip” wasn’t so bad.


It simply was my father in his controlled differentness. He was laying the ground rules for himself of the soul and connection. He told me that we are interconnected with those we love.  He explained non local consciousness in depth and still at the level a child could consume without much effort. The talks would sometimes be side by side as I sat at one of the stools of his bar, or while he was teaching me Mandarin and calligraphy. Or while I was dancing on his fabric cutting table, or while I was working with the wood.  I think he understood that I could sometimes take in more information while distracted by a kinetic exercise. I can’t really know why he did this, perhaps it was just instinctual. But, those lessons are the ones that stayed with me.  I can remember very little wisdom I received while in formal education. Certainly nothing that lasted me a lifetime.  And, I remember that there was little drama, or extensive explanations.  Often my father’s wisdom came between hammer strikes of this project or that, with a nail hanging out of his mouth, a cigarette tucked behind one ear, and a small pencil for measuring in the other ear.
Now scientists have newly discovered proof that our brain operates on a non local consciousness.  An interconnectedness that is not affected by time, space or distance.
They do not understand it.  This is of the next frontier in the study of the mind as the soul, I believe.
They have been able to show that this is true of all sentient beings.  There is a study where a camera is put on the dog of a person at their home, their human goes to work, they lay down.  Then when their human is ready to come home and is leaving work, time after time the dog will go to the door in anticipation.  Some observing the study said, ‘Well, the dog could know what time their human gets off work.”  So the study included randomizing the event.  The human would get in their car and start home, then turn around and go back to work.  When this happened, the dog, would go lay down, knowing that their human was not on their way.

My father did his own version of this study for me.  He called me Poopsie. I know, right?  He said "Poopsie, I am going to be gone for three months.  If it gets really bad and you just need to talk to me, send me a message with your mind.  But only do it if you really need me because it is hard to call from sea."  This was the seventies and ship to shore calls were often difficult.

The first week of his absence I thought about sending him a message, but then thought better of it.
I had complete belief that he would call.  About six weeks later, my dog Teasha died.  She was a big white Siberian husky with blue eyes and the soul of a guardian.  I went to school knowing that Daddy would call me after school, I just knew it.  He did.  His first words to my mother where, “I am sorry about the dog”

My father died from Parkinson’s Disease.  A disorder I can only think of as a cruel reality of life to become a prisoner of your own body. I know the physical reasons for it.  In fact, I have extensively researched its neurobiology.  But for me, it is nothing less than the cruel curse of the Medusa. A robber of one's own ability to move their own muscles,  a slowly creeping goregaon that freezes you in slow motion while your loved ones witness the event in slow motion too. In this way, perhaps I am giving Medusa a bad wrap, her way seems a little kinder. I was sixteen when Daddy came home from the ship for the last time.  Finally, my Daddy was home to stay.  We would have time alone to talk, I cherish those times.  Reading to him “The Old Man and The Sea” after my mother would leave very early in the morning to work at the local gun factory.  But those cherished memories are all mixed up with pain, and the terror of seeing my Daddy die.

I remember the day he died.  I was late for work.  I was irritated because he wanted a chocolate Ensure before I left, and I was young, thinking “I’m gonna get fired”.  As I scurried out of the room, my Daddy said, “Poops!” I turned to see his cerulean blues, they met mine.  A feeling passed through my body that I could not feel as anything but coldness at the time, he raised his left hand, battling the tremors like King Arthur fighting a dragon, and the dragon was winning.  He said very clearly, “Bye, bye Poops.”

I said, “Bye bye Daddy” and rushed to get to work. I think you can imagine that if there was a point in time and space that was accessible to me,  I would go back there, hold his hand, and tell him it was o.k.  But, he was my Daddy, he never wanted that. He was strong and brave, and Medusa will never sever my soul from his soul. Someday, I know, we will meet again. See you next trip Daddy!

Posted by The Salty Sea Siren at 7:37 AM