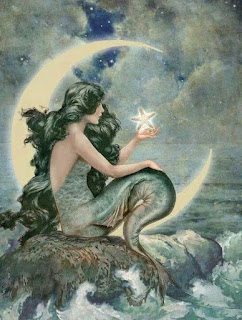 When I was in seventh grade, I was chosen to be the star of the school play.  I remember my character’s name was Elaine. She was a librarian.  Our teacher was passionate about the story and had gone to a great deal of work to arrange for a special afternoon performance of the play for parents only.  I was particularly excited because my world was ruled by the sea, and like waves in the ocean, my father came home for two months, and went away to sea for three.  This play happened to fall on the month of October, my birth month, which my father usually found a way to be home for.  With the excitement came an emotion I would later easily identify as social anxiety.  This drama played itself out for me on many occasions in the form of fixating on some small negative story I told myself about myself.  On this occasion, my well intentioned mother decided to put sponge curlers in my hair the night before the play.  I have fine Irish hair, and the result of the sponge curler wet set was somewhere between Bozo The Clown and bouncy cotton candy.  The more I brushed the worse it got.  My father drank his morning cup of coffee and quietly observed my complete melt down.  My mother tried to cajole me into acceptance that this was happening whether I liked it or not, cotton candy Bozo hair was the look I was wearing that day.

I went to school mad as a wet cat with its tall under the rocking chair.

My father just went to his shop.  I remember it started to rain, it was cold and on the way out of the house I ripped my stockings on the back stairs.  His woodshop was across from our house and just as big, he had built an awning over the door, his pot bellied stove burning hot out the chimney.  I can still see him there in the doorway, in his brown cords, leaning against the door, a cigarette in his hand, and the smile on his face accentuating the deep dimple on his cheek. Laughing to himself at the rage of my little self.

When it was time for the play in the afternoon, he was there with my mother in the front row.  Still grinning, his deep dimple on his right cheek showing he was ready for some mischief.

I am the child whom, at forty seven, my father thought he would never have, my father's only child.

Daddy was there in his button down blue shirt that matched his blue eyes and in his lap was a special Nikon he had brought home from his last trip to Japan.  He took pictures while still being able to look at me with amusement.

My father in his woodshop did many marvelous things.  He was an upholsterer, master craftsmen, he could tie any knot, when in the Navy, he tied the knots on the bridge of the USS Constitution.  He painted bridges professionally often in the Bay Area, after he hit shore in Martinez. He always sailed as the Boson, and was well liked by the crew and by local woodworkers in our small farming town in Northern California. Times were different then.  He had a bar in his shop with an old 1950’s refrigerator and a oven behind the bar.  I was the official bartender.  I would make snacks, wipe the bar, and serve beer (like I said, times were different)  I would even charge a fee in my mason jar on the bar.  When my father asked why he was paying 25 cents for beer he bought,  I would tell him he had not accounted for my service fee.  He would laugh and tell his friend I was a professional gypsy.

The next day I remember I was feeling kind of let down, even though I had remembered all my lines, and everybody clapped, I felt like the big event was over and I still had my cotton candy hair to feel bad about.  It was a Saturday morning but I didn't want to watch cartoons as was my tradition.  I went for a long ride on my Appaloosa Morgan horse, Little Thing,  I moped around the creek feeling sorry for myself and in the late afternoon returned to see what was happening in the shop.  Daddy’s flat bed truck was stacked with lumber, and the local shop teacher’s trucks where in the driveway, so I knew my services where needed.  Because, you know in my world beer went with band saws, the smell of shaved wood and Daddy’s splash of Old Spice.

When I arrived to the bar, I found something very special.  At the time I did not realize how often I would revisit this memory in my mind.  How could I? How would I have know that he would never know me beyond my nineteenth year.

My father, the sailor, the woodworking wizard had made a marquee, inside a picture he had taken of me at the play, glitter glued inside a star, on top of that he had placed Plexiglas and drilled the marquee into the wall with bolts so that it would never come down.  I remember the earth was clean from the rain the day before, I can see him sitting at the bar and pointing to it, telling his friends, “Yeah, she was the star of the play.  She was the best, just the best..”